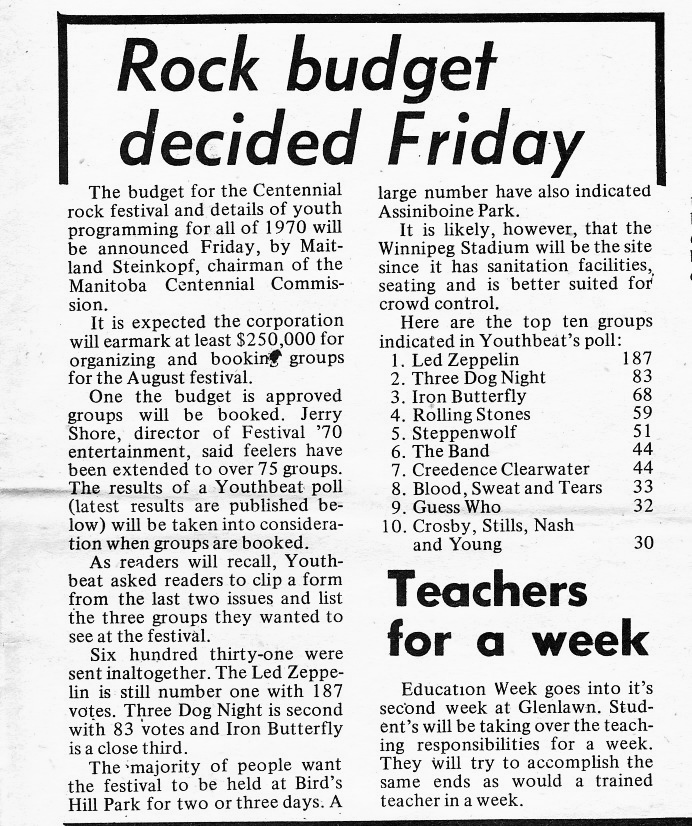 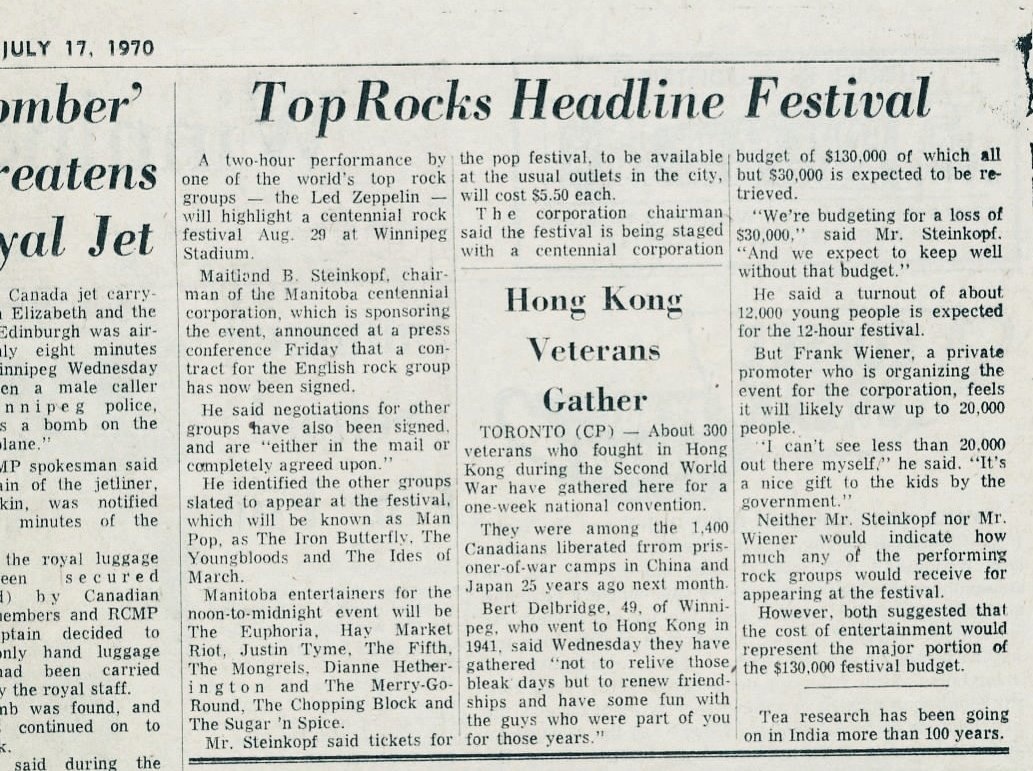 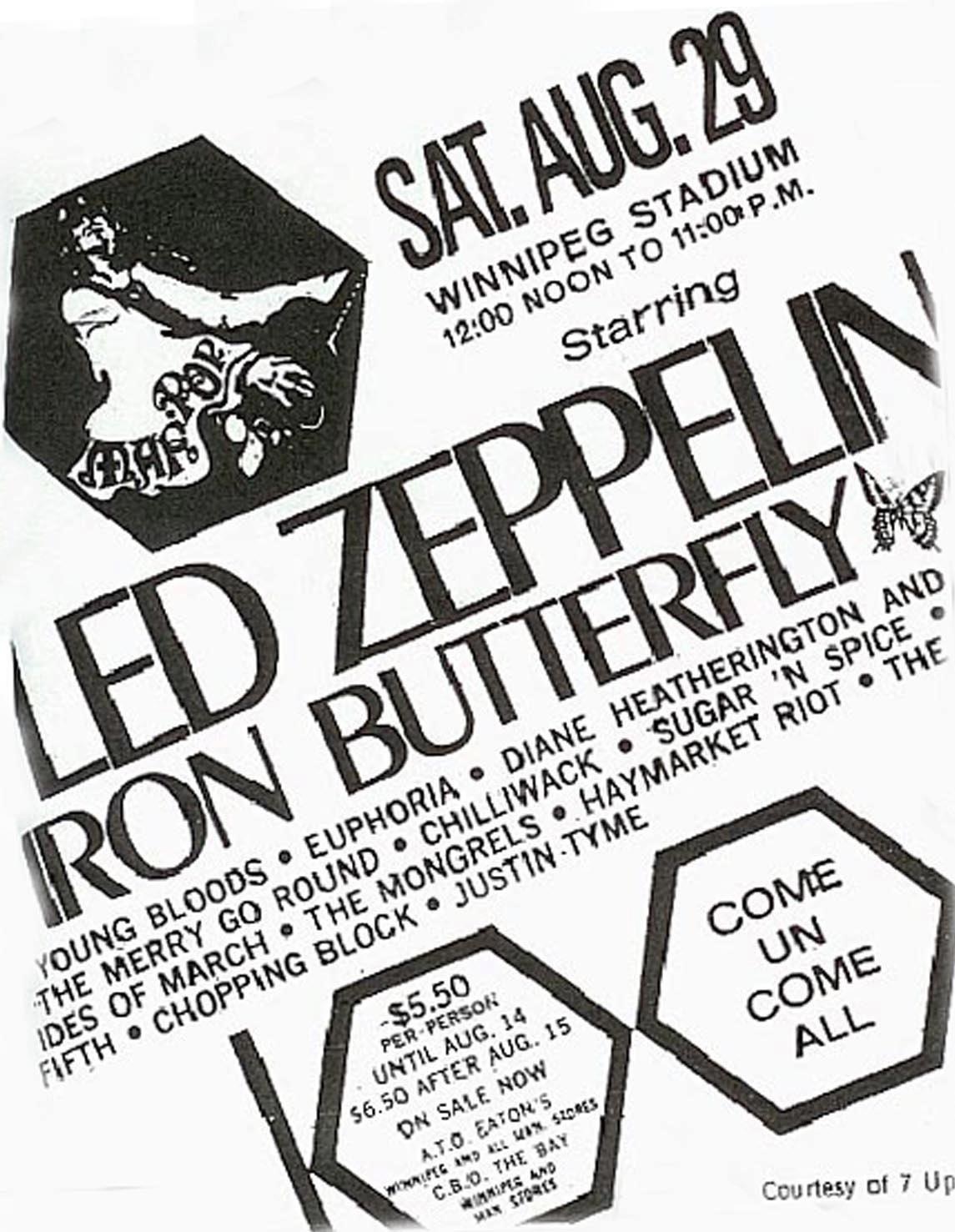 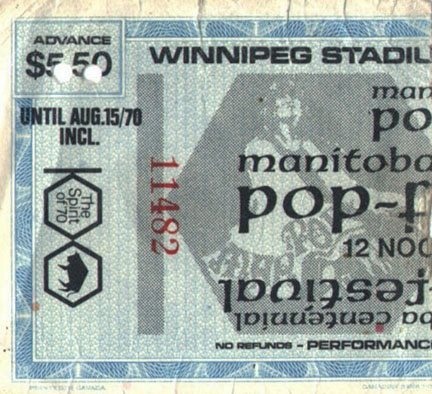 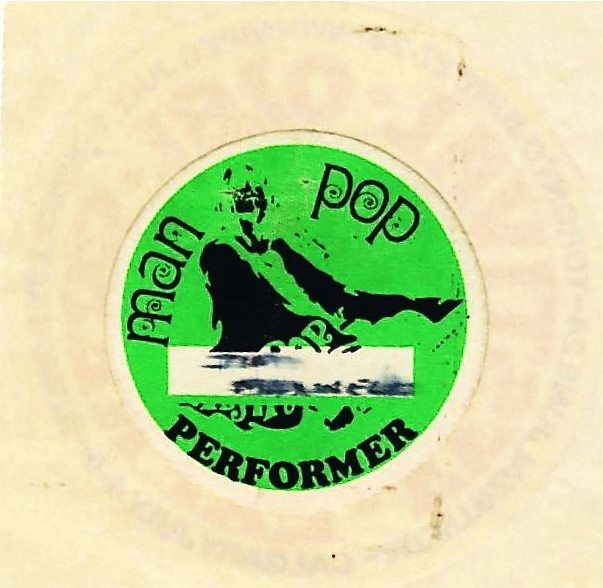 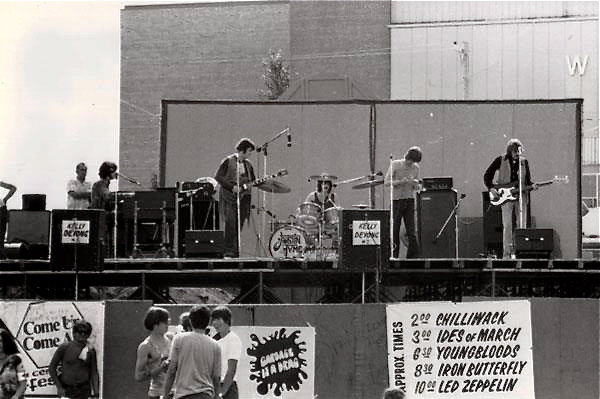 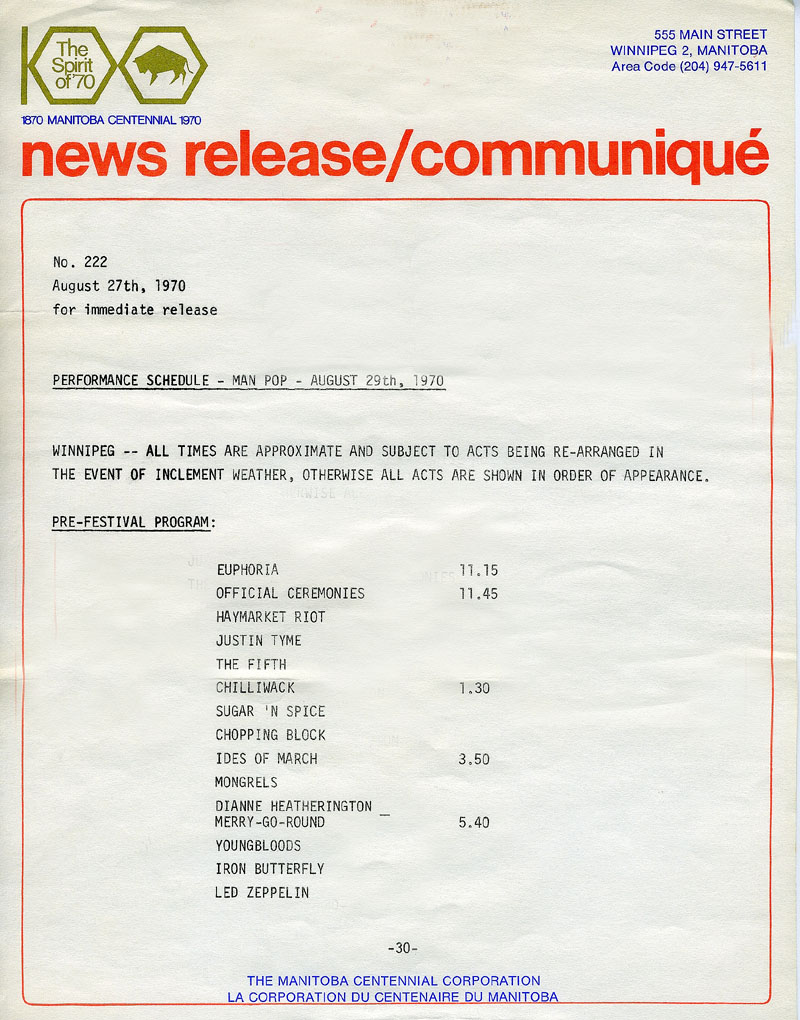 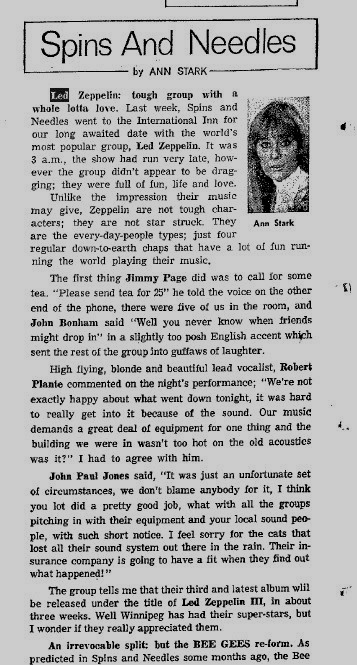 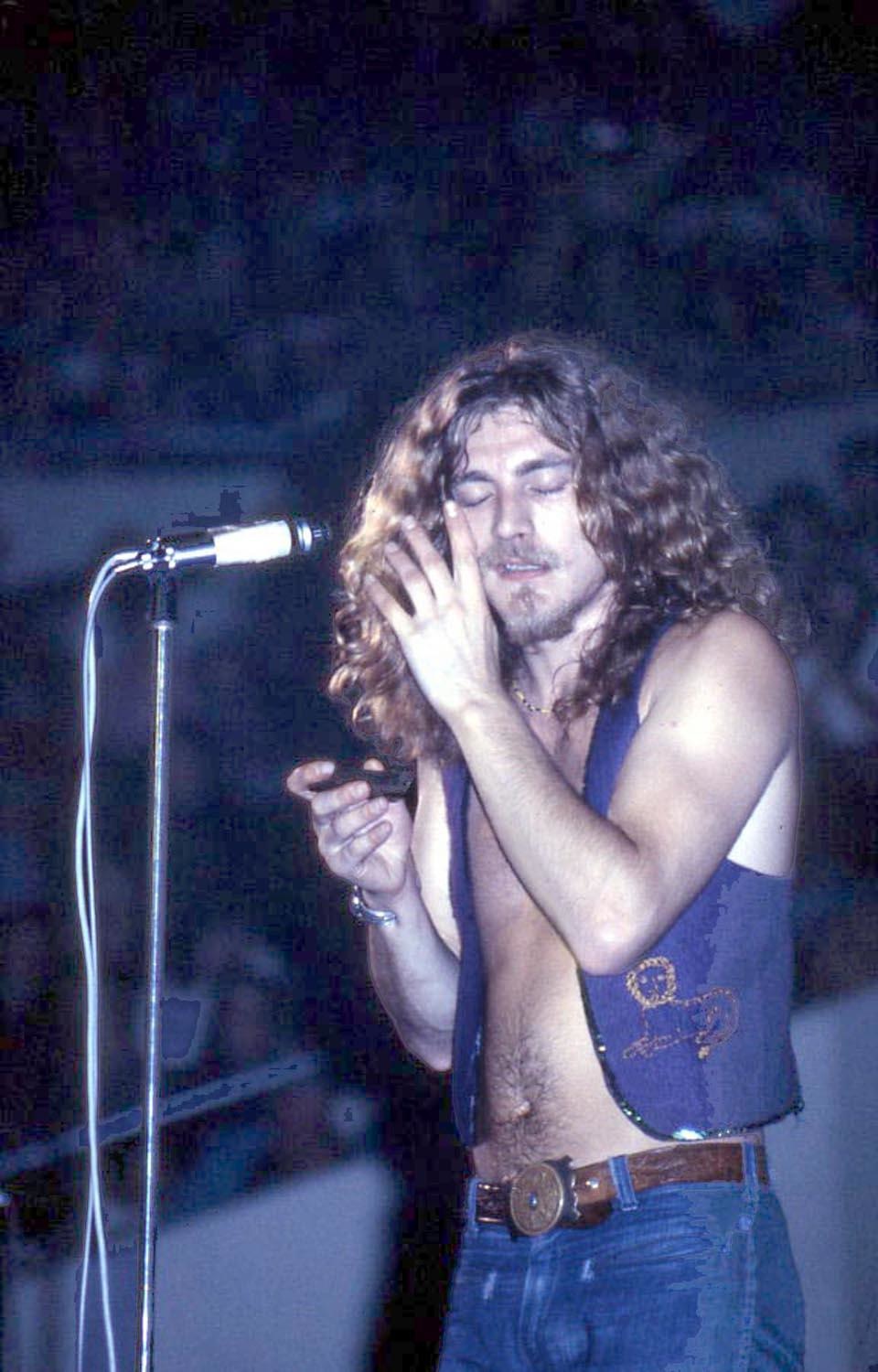 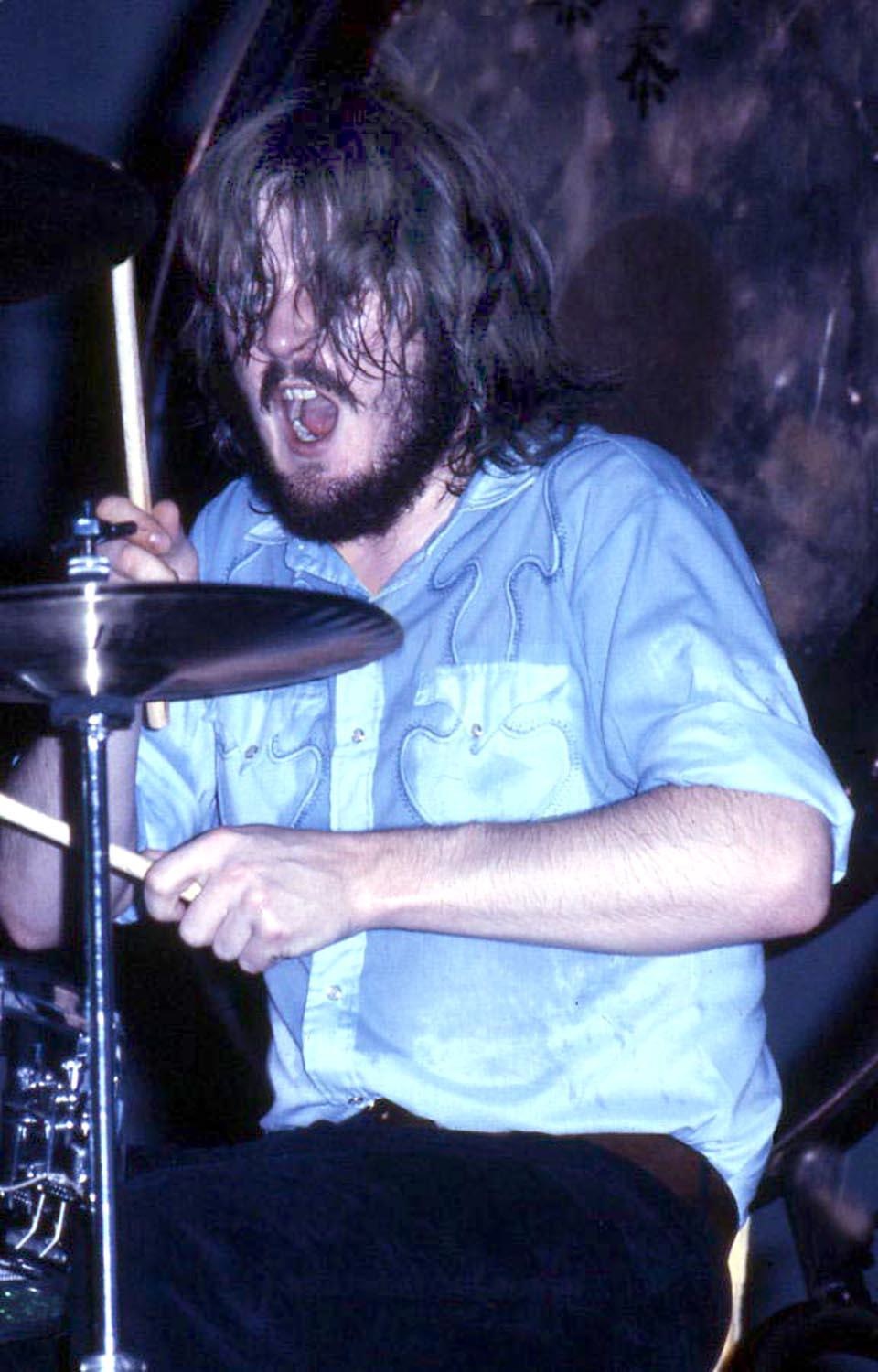 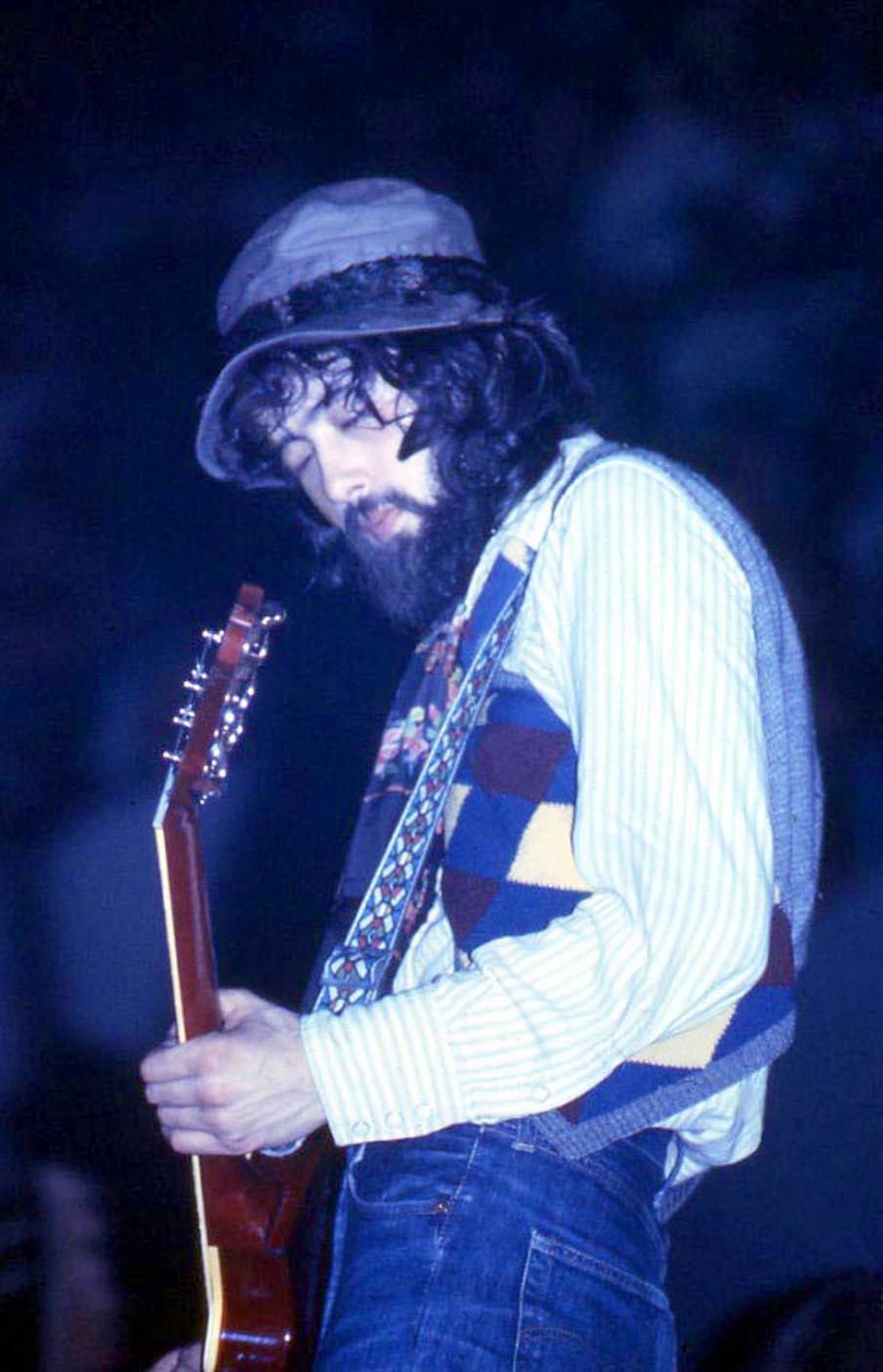 Manitoba's 1970 summer of outdoor music festivals began on May 24 with the Niverville Pop Festival, which transformed from a friendly hippie fest into a colossal mud bath after torrential rain disrupted the event. So it seemed sadly fitting the concluding summer event, Man-Pop, would suffer a similar fate. But unlike the Niverville event, Man-Pop continued indoors thanks to quick thinking and a team effort.

What resulted 45 years ago has become the stuff of legend.

Man-Pop -- the only rock festival sponsored by the provincial government -- was held on Saturday, Aug. 29, 1970. What began as an outdoor concert at the Winnipeg Stadium finished more than 15 hours later inside the Winnipeg Arena with one of the most memorable shows ever to grace a local stage, even a makeshift one. Chances are many of you reading this were among the 14,000 or so who attended the event.

Ballots were printed in the Free Press and Winnipeg Tribune to be mailed in. With chart-topping albums at the time, Zeppelin and Iron Butterfly were a shoo-in as fan favourites, and the Youngbloods and Ides of March were also booked. The Rolling Stones placed fourth, while Crosby, Stills, Nash & Young finished 10th in the voting. (Three Dog Night ranked second but was unavailable.)

The festival was scaled down to a one-day affair with a budget of $130,000. Tickets were $5.50 in advance, $6.50 at the gate. The Centennial Corp. was not expecting to turn a profit but indicated the projected loss was manageable within their overall budget. Local booking agent Frank Weiner of the Hungry I agency was tasked with securing the local talent, while impresario Jerry Shore looked after the big-name acts.

On the morning of the concert, the sun shone brightly as thousands of young people began filling the football field. Steinkopf took to the stage around noon, declaring Man-Pop open with the words, "We'll show those squares in government."

The first half-dozen acts were local groups, with Euphoria (featuring yours truly) kicking it off. I clearly remember standing onstage and facing my Garnet amplifier when we were introduced, turning around and looking out over the largest crowd I had ever set eyes upon. It was my very own Woodstock moment, and local photographer Gerry Kopelow captured the stunned look on my face.

We were received with polite applause. Haymarket Riot followed with the next set, as the crowd continued growing. Justin Tyme, boasting a new lineup, and Next (formerly the Fifth, and featuring future Harlequin frontman George Belanger) were next, followed by pub favourites Dianne Heatherington & the Merry-Go-Round.

'It was obvious they were really enjoying themselves, and they played forever.

You could tell they were all loaded, but who wasn't?'

Tribune reporter John Forsythe, writing of the event in Monday's newspaper, wrote, "The stadium had a picnic-like atmosphere in the warm 70-degree temperature Saturday morning. Thousands sprawled in front of the stage at the south end of the field and gulped beer, wine and other more potent beverages. There were several announcements warning that a poor quality 'white lightning' (LSD) was being circulated, but drug-taking was unobtrusive. In the clear spaces at the north end of the field, groups of teenagers played catch with footballs and Frisbees (toy flying saucers)."

Married musical duo Bill and Sue-On Hillman had an idea for keeping dry.

"Sue-On and I went across to the Polo Park mall and purchased plastic drop sheets that we wrapped ourselves in as we sat on the turf near the stage," recalls Bill Hillman.

It wasn't until around 5 p.m. and Chilliwack's rather prophetic Rain-o that the clouds opened up. Grabbing whatever improvised shelter they could find (mostly green garbage bags), few left the stadium, expecting the show to resume once the rain let up. Unfortunately, that never happened.

"Amazingly, the... crowd held tight," wrote Forsythe, "dancing and singing in the rain, taking off wet clothes -- almost entirely in some male cases -- or standing packed together under the stands, sipping coffee."

Following frenzied negotiations with Winnipeg Enterprises, Garnet Amplifiers and various band managers, Steinkopf returned to the rain-soaked stage around 7 p.m. to announce the festival was moving into the adjacent arena. Suddenly, the passive crowd mobilized en masse in a mad dash to get a decent seat inside and escape the continuing torrent.

"The rain at that time was coming down in torrents, and the crowd fled as if from a holocaust," wrote Forsythe.

"One of the guys in our band got a heads-up that it was moving to the arena," notes Harold Eide, "and we ran up there and waited at the door till it opened."

A scuffle ensued outside the arena as hundreds of ticket-holders found themselves barred. A local radio station had declared it a free concert, and hundreds more raced to the arena.

"I heard about the chaos on the radio and just hitched over to the arena and walked in the back entrance with the rest of the paying customers," says Nelly Mills.

Three glass doors were shattered as 50 police officers held back the mob. Steinkopf came out to reassure the angry ticket-holders they would receive a full refund.

Inside, a makeshift stage and jerry-rigged PA comprised of more than a dozen Garnet speaker cabinets was hastily wired together.

The gear was not designed to do what it did, but it somehow did it," recalls Haymarket Riot drummer Barry Carr. "There was no planning and no time to get it put together properly, but it worked remarkably well considering the odds."

The headliners were assured this was the same gear used by the Guess Who, by then one of the biggest rock acts in the world. The musty aroma of damp clothes mixed with sweet-smelling marijuana hung like a cloud just above everyone's heads. Spirits ran high, and a party atmosphere ensued as the crowd waited for the entertainment to resume.

"I remember it being like sardines," recalls guitarist Ron Siwicki. "So hot, humid and sweaty. We were all squashed against each other. It took so long to get a PA put together."

In the interim before the festival moved indoors, I managed to go home and change out of my wet clothes. When I returned, the front doors were already locked, and an angry throng was banging on the doors demanding entry. I went around to a side door of the arena and pounded on it until a young security guard finally opened it. I showed him my performer's badge and told him I was due to play. He let me in, and I found a seat in the stands and waited for the concert to resume indoors.

The Youngbloods were first up, offering a laid-back, bluesy set that went far too long as the crowd grew restless. Behind the scenes, their manager wasn't letting the band wrap up until payment was received in full. With their hit song Vehicle still on the charts, Chicago's Ides of March followed and were the surprise of the night, turning in a high-energy performance.

"I loved the jolt of the Ides of March," recalled Moe Hogue. "Talk about a band being truly pumped up to play."

George Belanger agrees. "They weren't really a favourite band of mine, but I thought they stole the show musically, them and Iron Butterfly."

As Ides of March drummer Mike Borch remembers, "That night was unforgettable for us. We were thrilled to be playing with the likes of Zeppelin, Iron Butterfly and the Youngbloods. Somehow we soared that night and went places musically in the jam sections that we hadn't been before." Amiable and energetic guitarist/singer Jim Peterik, sporting saddle shoes, was an instant fan favourite.

Next up, Iron Butterfly were true to their name, pummelling the crowd with a heavy metal, twin lead-guitar assault culminating in the inevitable and interminable In A Gadda Da Vida, complete with lengthy drum solo.

Dennis (the Gear) Lind insists Butterfly stole the show. "They were unbelievable. They got standing ovations. They were the best act there."

Rumours circulated among the crowd about whether Zeppelin would actually perform. With a clause in their contract stipulating that in the event of rain Led Zeppelin would not be expected to perform but would still be paid in full, the band members, manager and crew were holed up at the International Inn (now the Victoria Inn by the airport), high (one assumes quite literally) and dry. Steinkopf appealed to their burly and belligerent manager Peter Grant to appease the rain-soaked crowd by performing, but he remained intransigent.

It took local singer Dianne Heatherington exhorting the British band to play that got them moving, insisting they owed it to the crowd, and calling them "a bunch of wimps." Merry-Go-Round keyboard player Hermann Frºhm accompanied Heatherington to the band's room.

"She shamed them into playing," marvels Frºhm. "She told them, 'All these people are here to see you and you're chickening out?' She spoke to them like they were her little brothers or something. No fear whatsoever."

Grant demanded the remainder of their fee be paid first -- along with several thousand more dollars for the four-hour delay -- before his boys would appear. According to local promoter and music journalist Bruce Rathbone's colourful eyewitness account, "Maitland plunked US$25,000 cash in mixed bills on the table in big stacks." How he came up with the cash late on a Saturday night remains a mystery.

"Grant said, in a slurred thick British accent, 'Mr. Steinkopf, you are a gentleman. We are ready to give the best goddamn show we've ever played.' "

It was well past midnight Sunday when Zeppelin took the stage. Despite the limitations of the PA system muddying their overall sound and a lack of suitable concert lighting for atmosphere, they played a loose, stoned set with extended guitar solos by Jimmy Page.

"It was obvious they were really enjoying themselves, and they played forever," recalls Rathbone. "You could tell they were all loaded, but who wasn't?"

While not their finest moment musically, it was certainly among the band's best-received sets ever. One concertgoer insists singer Robert Plant altered the lyrics in Dazed and Confused from "Tried to love you baby/but you pushed me away" to "Saved all my money/gonna buy me a new PA." It had been a very long day, and some in the crowd fell asleep during the band's set.

Led Zeppelin finally walked off the stage at around 3 a.m., leaving the audience both exhausted and satisfied.

Interviewed shortly afterwards back at their hotel, Plant admitted, "It was hard to get into it because of the sound, and the building we were in wasn't too hot on the acoustics, was it?" Added bass player John Paul Jones, "I think you lot did a pretty good job, what with all your groups pitching in with all their equipment on such short notice. I feel sorry for the cats that lost all their sound system out there in the rain. Their insurance company is going to have a fit when they find out what happened."

"I was 15 at that time, and I was there," Jack Moore says of Man-Pop. "It was the best, and I don't think we will ever see another one like it. Maitland Steinkopf will never be forgotten because of this event."

With thanks to Bruce Rathbone.

Republished from the Winnipeg Free Press print edition August 30, 2015 A1