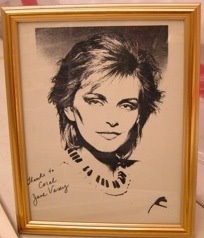 “Jane was an inspiration to a lot of people,” states Donnie ‘Mr. Downchild’ Walsh, recalling blues piano ace Jane Vasey. “She was gorgeous and outgoing and she made it look easy.” Slim, vivacious and classically-trained, Jane was the antithesis of the typical blues purveyor; but there were few who played it better. In her seven years with Toronto’s blues giants Downchild Blues Band, Winnipeg’s Jane Vasey set the blues world on its ear and carved out a role for a young woman in a bluesman’s world.

Born in the South Winnipeg neighbourhood of Crescentwood to Ross and Dorothy Vasey in October 16, 1949 Jane began piano lessons at age six and quickly discovered a love for music. The family ( five girls – twins Rose and Catherine, Anne, Jane, and Heather born in 1961) moved to River Heights, where Ross taught school at Robert H. Smith and Kelvin High School before moving to Neepawa in 1955 as a school inspector. Jane continued her music studies. “I remember we were in Neepawa when my brother-in-law died,” offers Dorothy Vasey. “Jane didn’t say anything much, she just went over to the piano and played a whole piece she composed all by herself.” Returning to Winnipeg in 1957, Jane attended J.B. Mitchell school and graduated from Kelvin High in 1967, going on to earn a Bachelor of Arts from the University of Manitoba in 1970. Her music career had already begun after winning the Earl Ferguson Award at the Manitoba Music Festival and appearing on CBC-TV’s Calling All Children. “It was all classical music until she went to Toronto,” claims Dorothy Vasey. At home she played her Beethoven and Chopin.” Following graduation Jane played piano for the Royal Winnipeg Ballet School before moving to Toronto that fall. There Jane furthered her studies with the Royal Conservatory of Music as well as playing for small ballet classes, teaching piano lessons, performing with the Global Village Theatre, Toronto Workshop Theatre, and Young Peoples’ Theatre as well as composing music for Carol Bolt plays. But it was the blues that would soon become her passion.

Jane once told a reporter how she discovered Chicago blues piano master Otis Spann. “A girlfriend of mine, Diane Roblin, brought me over one of his records, and it was like a revelation. It seemed to involve a lot of things I liked about classical music – great runs and phrases that I could really relate to. I turned right on to it.” Smitten with the blues, Jane happened to be in Grossman’s Tavern in Toronto where she saw the Downchild Blues Band performing and approached the band members who, at first, were dubious about a female piano player. “She started listening to blues records and because of her classical training she really picked it up and really could play it,” marvels Donnie Walsh. “She had the feel. She was so fast to learn that we didn’t have to sit around and teach her. Not many people can play the blues. She learned to play like Otis Spann in about an hour and a half. Very quickly. Jane could play like Otis Spann, she could play like Pete Johnson. Then she started to develop her own style after listening to all these other pianists.” Jane joined the band in 1973, making her debut on the group’s hit single Flip, Flop, Fly.

For her parents back in Winnipeg the news that Jane had joined a band was a surprise. “Well, we went along with it anyway,” allows Dorothy Vasey. “It wasn’t exactly what we thought she would do.”

Jane would go on to wow audiences across North America with her fluid blues style and intuitive feel. “She had a killer left hand for the walking-octave style,” states Prairie Oyster piano player Joan Besen, “smooth, fast, and solid.” Jane even managed to impress many of the blues masters including the legendary Roosevelt Sykes. As Donnie Walsh relates, “We were playing in Vancouver when the Folk Festival was on and she went down to a workshop they had for blues piano players and Roosevelt Sykes was there. And she sat down and started playing and he went nuts and the crowd went nuts for her. She knocked out Roosevelt Sykes because he appreciated that she could really play.” Jane had Roosevelt dancing and singing to her rendition of Red River Boogie.
Publicist Richard Flohil once described Jane in performance. “She held her head at an angle while she played, upright and sparrow-like, as if she wanted to see and hear everything onstage with a mixture of curiosity and anticipation. Her skin was pale, her eyes green, and her hands tiny. How did she manage to play so hard and tough when she looked so perky and small and gentle?”

Jane appeared on six Downchild albums: Dancin’, Ready To Go, So Far, We Deliver, Road Fever, and Blood Run Hot and several singles including I’ve Got Everything I Need (Almost), Tell Your Mother, and her own composition Trying to Keep Her 88s Straight. “She became the glue that held the band together,” noted Richard Flohil. Jane toured North America with Downchild playing clubs, concerts and festivals and often returned to play in Winnipeg. Being the lone female in an all-male band and in a predominantly male industry never fazed her as Jane earned acceptance from everyone who heard her. “Jane was so good of a musician and a neat person so she never had too many problems with that,” confirms Donnie Walsh. But she always retained her big heart. “One Christmas out on tour she went out and bought everyone Christmas presents,” smiles Donnie.

In 1975 Jane was diagnosed with leukemia. Doctors gave her five years to live; Jane defied them by living six and a half years. Throughout that time only a handful of insiders knew of her affliction, including band mate and boyfriend Donnie Walsh. ““We kept it pretty quiet,” he maintains. “We had a wonderful time when we were together. It was weird because when we got together she was dying. She knew she was dying. So we kind of lived for the moment. We had a great time together and played a lot of great music together. You kind of put it out of your mind but you know it’s coming. And then it comes.” On tour out west in 1981, Jane was stricken in the leg and had to return to Toronto for treatment. Stoically she continued to perform with the band around Toronto though she toured less frequently. “I don’t know how she did it, how she managed to get up her strength for that,” notes Dorothy Vasey. “She never let on that she was sick.”

Jane’s last public performance was backing up blues great Eddie ‘Cleanhead’ Vinson at Toronto’s Brunswick Hotel in January 1982. Frail and exhausted from her treatment Jane nonetheless amazed everyone in the audience, including Vinson, with her virtuosity and strength. Jane died at home in Toronto on July 6, 1982. The music world mourned her loss. Tributes were given in every newspaper and news program across Canada. Brandon University established a scholarship for piano performance in Jane’s instigated by her parents and endowed from an all-star benefit by the Toronto blues community that had embraced Jane.

“I still have all her records and tapes and I still listen to them,” says Dorothy Vasey with pride.