For most Winnipeggers, the Vietnam War was a distant conflict that appeared on our nightly national news broadcasts but remained remote from our reality.

And yet, at the height of the conflict, in which more than 50,000 Americans and several million Vietnamese were killed, Winnipeg-born singer Fern Rondeau entertained war-weary American GIs only a few kilometres from the fighting. Along with her husband, Pete Turko, and several local musicians -- collectively known as A Touch of Class -- Rondeau witnessed the horrors of war in the eyes of the soldiers.

"Onstage, you would look down at these young guys, many of them with their faces still covered in paint from being in the bush, and you could see the sadness in their eyes," Rondeau says.

"We'd sing happy songs to try to cheer them up. That was hard. My job was to make them feel better. They'd watched their buddies die in their arms and were feeling bad enough."

Was she ever scared on her two tours in Southeast Asia?

"I guess I was too naive to be scared," she says.

"The generals and the majors, who were more my age, treated me like a queen. I felt protected, so I was never scared."

Born in 1943 to a single mother in the North End, music came into Rondeau's life via television.

"When I was about 12 years old we got our first TV, black and white, and I used to watch Brenda Lee, Teresa Brewer and Connie Francis. That's when I started singing."

Leaving school in her early teens to look after her baby sister, Colleen, Rondeau began working at Oretski's department store on Selkirk Avenue at age 16.

"I loved to sing, so I would be walking down the aisles straightening things up, singing Connie Francis songs," she recalls. "The manager was a nice man, but he used to tell me to keep it down."

At age 19, she accompanied a friend to the Lincoln Motor Hotel on McPhillips Street, where she met singer Pete Turko, the son of Ukrainian opera singers. Not long after, the two began performing in clubs around the city -- including the Gordon Hotel chain, Club Morocco, the Viscount Gort, Pierre's Club 76 (now the Palomino Club) and Chan's Moon Room -- and travelling as far east as Thunder Bay and as far west to Vancouver. Rondeau also sang on several CBC-TV productions and travelled to Churchill for a gig with Ted Komar's Orchestra and the Guess Who.

'My job was to make them feel better. They'd watched their buddies die in their arms and were feeling bad enough'

As younger sister Colleen Titanich remembers, "Fern was a star to me. She was so beautiful. I used to watch her put on her false eyelashes and makeup before a gig. The smell of hairspray permeated the room. I would just stare at her. I would pray to God to take away my freckles, because Fern didn't have any freckles and I wanted to look like her."

Out west, Rondeau and Turko appeared at Calgary's Petroleum Club and Palliser Hotel, Edmonton's Klondike Days, opened that city's elegant Chateau Lacombe hotel, and performed at Vancouver's legendary Cave nightclub. By the latter 1960s, they had married and relocated to British Columbia, where work remained plentiful.

At an appearance at Dean Martin's club in Hollywood, Martin dubbed Rondeau "Miss Perpetual Motion" for her onstage performance.

"I'm a singer that dances," she explains. "I love to move when I'm onstage. I didn't want to just stand there like a statue. I was entertaining people."

Spotted at Vancouver's Bayshore Inn by American promoter Herb Fallis in 1968, A Touch of Class was offered a Southeast Asian tour, including performances in Hawaii, Manila, Bangkok and Saigon, along with an extended stint for U.S. troops in Vietnam.

"That first tour we played mostly for the generals, the higher-ups," says Rondeau.

The group would return again in 1970 for a second tour, this time playing more for the GIs on remote bases, accompanied by veteran Winnipeg bass player Bob (Moose) Jackson and drummer Jim Wales.

"They would drive us out in army trucks or jeeps to where the bases were," Jackson says, "or we'd fly out in helicopters along with guys either going out or coming in from the jungles. We would hear shooting from a distance. The Viet Cong rockets had a 20-mile range, so we would travel out and perform within that 20-mile radius, but no further."

"One time we were in jeeps travelling to a gig when we were fired on from the ditches," says Rondeau. "We had to jump into the ditch while the soldiers fired back. Those GIs protected me."

She was then escorted back to safety in Saigon.

"He had tripped a booby-trap wire, and his whole group was killed," he said. "The medics were keeping him alive, but there wasn't much hope."

He also recalls the realities of guerilla warfare.

"If you were out in the bars at night in Saigon, you never knew who you might be sitting beside. You never knew who was the enemy. We had to pass ourselves off as Americans. Canadians wouldn't have been welcome on the U.S. bases."

Each of them was issued an identity card from the British Embassy that allowed them to travel freely in Saigon.

"When we were in Da Nang," says Wales, "there was a strict curfew, and if you violated it or were found on the wrong side of town, you could be shot on sight. Your life really becomes worth not much when you're in that world. I thought it was going to be a two-week gig, but it ended up being a lot longer, and I was convinced I was never going to get out of there. We surrendered our passports when we arrived in Saigon."

Ironically, the band had to perform the Animals' hit We Gotta Get Out of This Place at every gig.

"That was the big song for all the GIs, and they would all sing it loudly," Rondeau says. "It was like their anthem."

At one mess-hall gig, a distraught soldier threw a Coke bottle at the stage.

"I was dancing, so he missed me," Rondeau recalls. "The other GIs were so upset because they kind of looked after me like I was their mother or girlfriend or sister. So they took this guy outside, and I don't know what happened, but I'm sure it wasn't good."

The Winnipeggers found the heat and humidity oppressive. They also were taken aback by the Vietnamese lifestyle.

"I came from a poor family, but when we went to Vietnam it was a whole different way of life," says Rondeau. "It really made me appreciate our life in Canada. Even a bar of soap was a luxury for those people. It was such a culture shock. We ate well on the bases and were treated so well, but we also got to see the squalor the Vietnamese people lived in. Sometimes we went out to where GIs were stationed and slept on a mattress in a tent or a hut and showered in cold water. But that was still better than most Vietnamese."

On the second tour in 1970, Rondeau came to realize the GIs were hungry for hard rock, not pop standards.

"We didn't do that kind of music. We were more versatile. We were a bit older than the GIs. They wanted to smoke weed and listen to hard rock. The times had changed."

During that tour, Rondeau was informed of her mother's death and cut the tour short to return home to Winnipeg, cancelling an Australian leg. Rondeau and Turko continued to play across Western Canada through the '70s, sometimes touring with Mandrake the Magician, and even tried cracking the Nashville scene. Rondeau also worked with actor/musician Gene Andrusco.

Her often-troubled marriage to Turko came to an end a few years after the birth of what Rondeau calls her miracle baby, Celeste. Shelving her singing career, Rondeau worked as a house cleaner. She remarried in 1995. In recent years, she has returned to performing at seniors residences in B.C., where she always goes over well.

"I'm old-school," she laughs. "I sing the songs they all know and love. I'm a smorgasbord of styles, not just one style"

Rondeau only made one recording, a 45 issued on a small independent label in Vancouver in 1968. Songwriter/producer Tom Baird wrote both sides of the single. Baird went on to become a big name in the music business, penning hits for Rare Earth and Diana Ross and co-writing Bobby Taylor & the Vancouvers' Motown hit Does Your Momma Know About Me with Tommy Chong.

Baird had a song he had written for Vicki Carr, but as Rondeau remembers, "Pete convinced him to give the song to me instead."

A smoky cool-jazz number reminiscent of Julie London's torchy Cry Me a River, I Never Had a Chance was well-suited to Rondeau's style.

"It was one of the most beautiful songs I had ever heard," she admits. "Red Robinson was playing it on the radio in B.C."

Unfortunately, the label failed to secure wider airplay and distribution.

"My mother had all the family members phoning Winnipeg radio stations every hour requesting the record," says Titanich.

Rondeau could have been a contender, but remains circumspect about her career.

"I never got to be rich and famous or buy my poor mother a house or a diamond ring like I had always wanted to," she says, "but I got to touch peoples' lives.

"That's what God put me on this Earth to do."

Reflecting on her stint in Vietnam, she says, "We were serving an important role for the soldiers, to make them feel good surrounded by the awful realities of war and taking them away from those realities for maybe a few hours. It broke my heart, but I understood my role and tried to make them happy."

Republished from the Winnipeg Free Press print edition June 7, 2015 A1 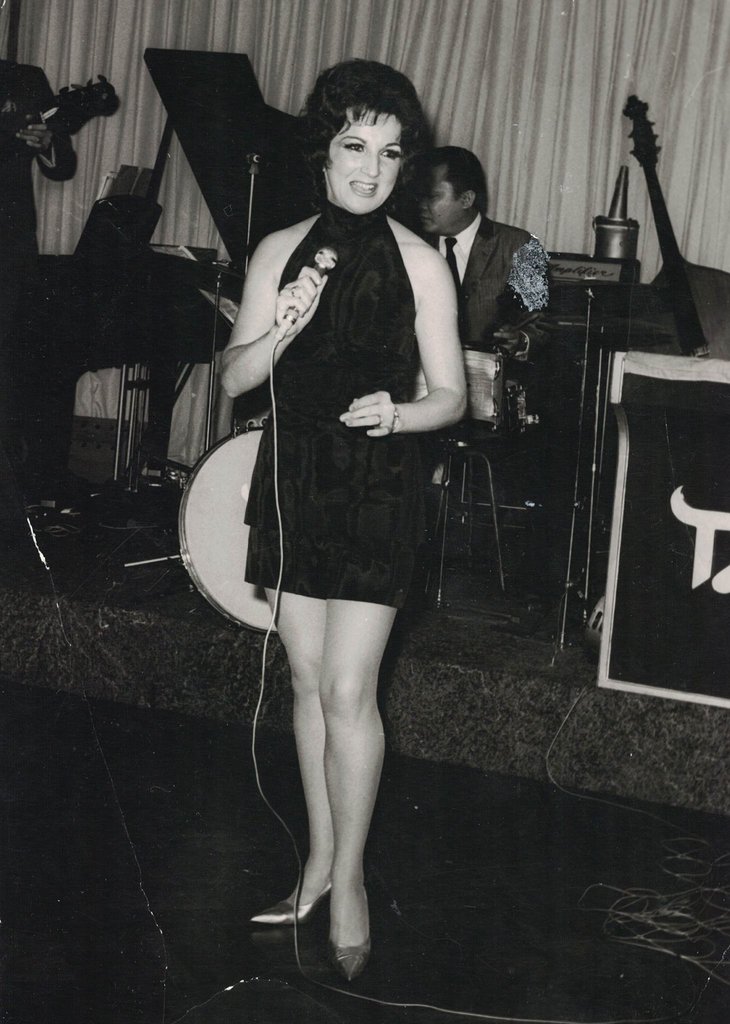