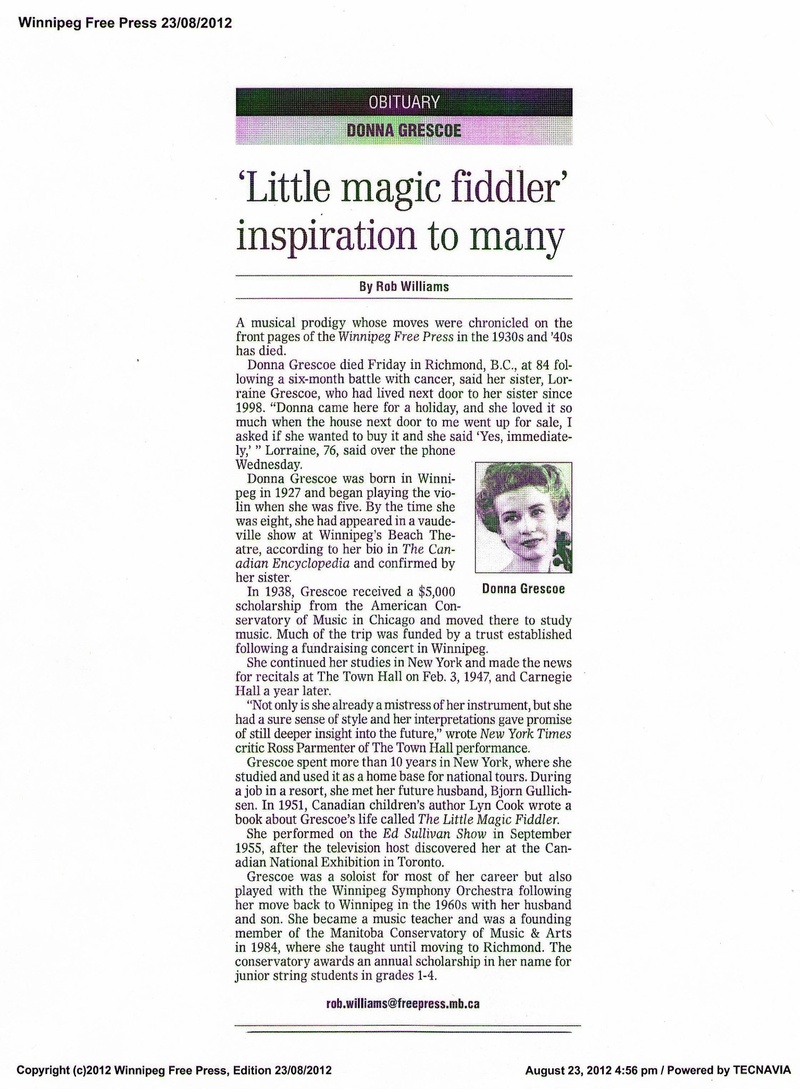 The world on her strings

Way back in 1950, I was a geeky 10-year-old when a nice woman from Ontario arrived at our house on Lansdowne Avenue in the North End.

Lynn Cook was a real-life writer who had just published her first, successful children's book. She wanted to meet our family, George and Christina Grescoe and their three daughters and a son.

She was researching our Ukrainian-Canadian roots and digging up stories about us -- especially about my oldest sister, Donna. She intended to write a fictionalized account of Donna. She had been a child prodigy on the violin before forging a career as a classical violinist. She was then 23.

I begged Mrs. Cook to let me say something in her book, which would end when Donna was 14 and I was just a baby. When The Little Magic Fiddler appeared the following year, a Free Press reviewer wrote, "Something warm and wonderful can happen to anyone who reads this charming book... a true fairy-tale whose Princess is a real person."

I was excited when its sympathetic author managed to slip me in by having our mom say:

"As for Paul" -- she patted the dimpled hand of the baby in the high chair beside her -- "he wasn't even here at all."

Well, that was the start of my literary life. Because of Donna, I was star-struck, always fascinated by people in entertainment. I became a magazine writer and preferred to hang out with the likes of Leonard Cohen and Johnny Cash.

Donna was born a dozen years before me in Winnipeg in 1927. She started playing violin when a door-to-door salesman asked Mom and Dad if they wanted to buy a tiny $6 fiddle for their five-year-old daughter.

Within three years, she was appearing publicly at the Beacon Vaudeville Theatre and taking lessons at the respected George Bornoff School of Music in Winnipeg. In 1938 -- a year before I was born -- she received a $5,000 scholarship from the American Conservatory of Music in Chicago and went to New York to perform at the Ukrainian-American Festival at the World's Fair.

At 14, she competed in the Manitoba Music Festival in Winnipeg, where the adjudicator was the distinguished British composer Arthur Benjamin.

After she performed, he said, "Hats off, gentlemen, a genius."

Four years later, Donna was on her way back to New York. She had wealthy patrons and local fans who contributed to a trust fund that would send her there to study with the famous former New York Philharmonic concert master Michel Piastro. Some of the money came from a concert Donna performed at the Winnipeg Auditorium, where all 4,000 seats were filled and 500 people were turned away.

In her 1947 New York debut at Town Hall, the New York Times called her "a mistress of her instrument" and a year later at Carnegie Hall, the New York Journal-American said she played "with exceptional poise, tone and style and a maturity uncommon for a 20-year-old performer."

Spreading her wings, Donna moved into less-classical venues in North America, from the Palace Theatre in New York to the Rancho Don Carlos nightclub in Winnipeg. I was in the audience that night when she appeared following a brassy-voiced singer. As Free Press reviewer Frank Morriss wrote, "Was there an unlikelier time for a concert violinist to appear in a noisy, crowded supper club? In two seconds flat you could have heard the proverbial pin drop. When she finished the number, the applause echoed and re-echoed 'round the rafters."

I was 16 in 1955 when my Big Sister performed at Toronto's Canadian National Exhibition. The emcee was Ed Sullivan, who had asked her to appear in New York on his popular TV show. He was also hitting on her to spend some time with him at a Quebec resort. Donna never did join him there. She had my folks send me east to protect her from Old Stoneface.

But Sullivan did once deke me out of his hotel room and shut the door so he could kiss her passionately.

That was the year Donna married Bjorn Gullichsen, then had a son, Eric. The family later moved back to Winnipeg, where, after her husband died in 1966, she returned to the violin to teach and also play in the string section of the Winnipeg Symphony Orchestra. She was a founding member of the Manitoba Conservatory of Music and later provided scholarships for its students.

After moving to the west coast in 1988, she married Charles Dojack of Winnipeg, a former cellist with the symphony and publisher of five ethnic newspapers.

Donna died of cancer in Richmond, B.C., Aug. 17. I like to remember her with the words of German literary critic Miriam Verena Richter in a book called Creating the National Mosaic: Canadian Children's Literature from 1950 to 1994.

In a long section on Lynn Cook's book about Donna, she wrote: "Through Cook's literary representation, the Canadian cultural icon Donna Grescoe takes on the role of a national heroine, strengthening the national psyche by serving both as a uniting element for society and as a model to emulate. The literary rendering of Donna's childhood years and success can help motivate young readers to follow her example, thus fostering the growth of a Canadian culture."