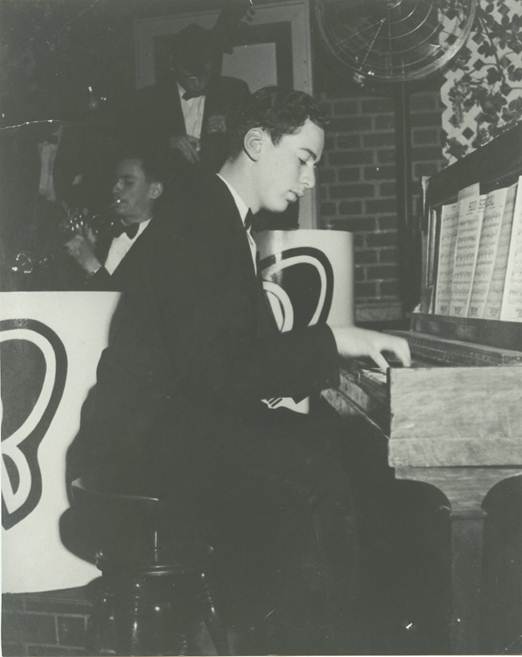 This is a photo of Dick Bell at the piano, with Morris Miller on trumpet and Jim Beer on bass. The photo was taken in 1945 when Dick led the University of Manitoba Dance Band. He was 17 years old at the time. The orchestra played at all University functions, fraternity and sorority dances. Dick used many musicians for both University and non-University dances, and other music sessions including: Des Munn, Marsh Phimister (bass fiddle), Al Joyal, Del Wagner, Chuck Skelding ( drums), Jim Thompson, Dave Shearer, Tom or Pete Nazer, Harold Fleishman (sax), Maurie Libman, Stu Barnet, Paul Grosney ( trumpet ), Wally Koster ( trombone) amongst others and Maxine Ware ( vocalist).  In 1944 Dick’s first group of student musicians played for the armed forces personnel at the United Service Centre canteen located in the annex of Eaton’s Dept. Store on Portage Ave. Dick continued to use up to a nine piece orchestra until 1951when he was asked to lead a quartet at Smitty’s Yacht Club on Archibald St. The group consisted of a former Hong Kong war veteran named George Sweeny who was a very fine alto sax player along with Tommy Dixon on bass and Joe McEwen on drums. In 1952 Dick joined Johnny Bering’s quintet. They played one night stands seven nights a week in southern Manitoba and Saskatchewan and  did so from April until late June at which time they played every night throughout the summer at “ Danceland “,  a log cabin style dance hall in Clear Lake, Manitoba. The musicians included Ernie Labovich on sax, Lloyd VanDuesen on bass, George Richardson on drums, with Johnny Bering on vibraharp (xylophone) and trumpet. In 1953 Dick travelled for about a year to Brandon, Manitoba by train every Saturday afternoon to play in a quartet. In 1954 he led a trio consisting of bass player Jimmy Piper and Leigh Warnock on drums. They played gratis once or twice a week at most of the legions in Winnipeg for the veterans of the World Wars. Dick also accompanied Peter Scott, a very popular CKY late night radio announcer and vocalist. In 1955 Dick decided to end all musical engagements in order to continue on with his successful business career.